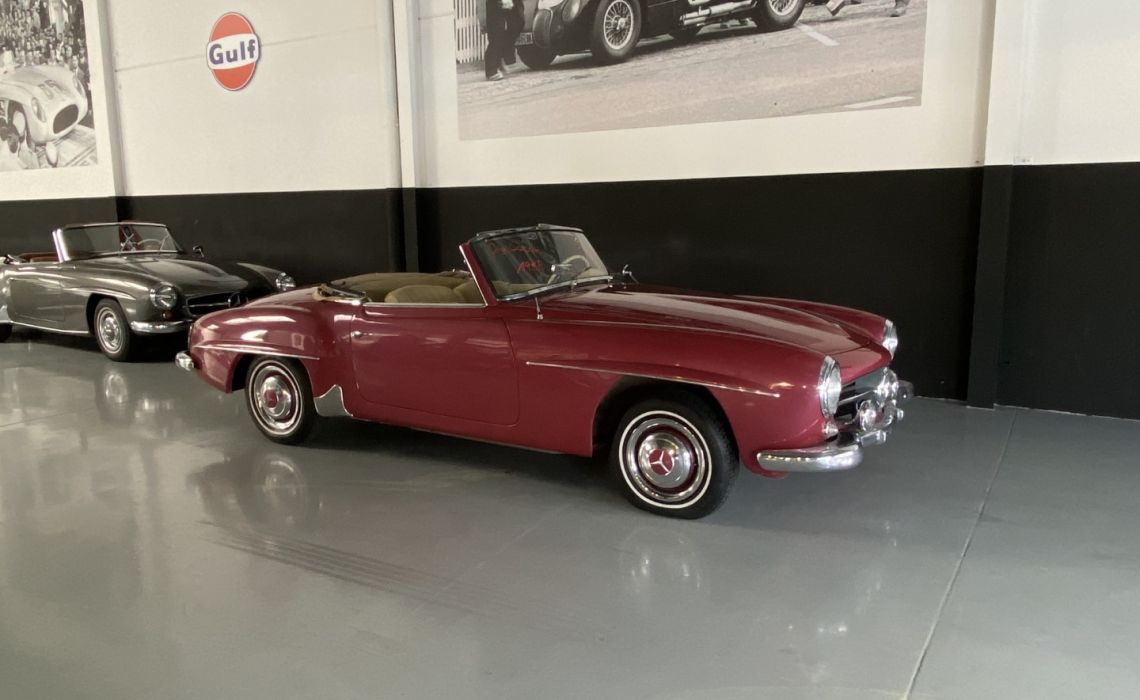 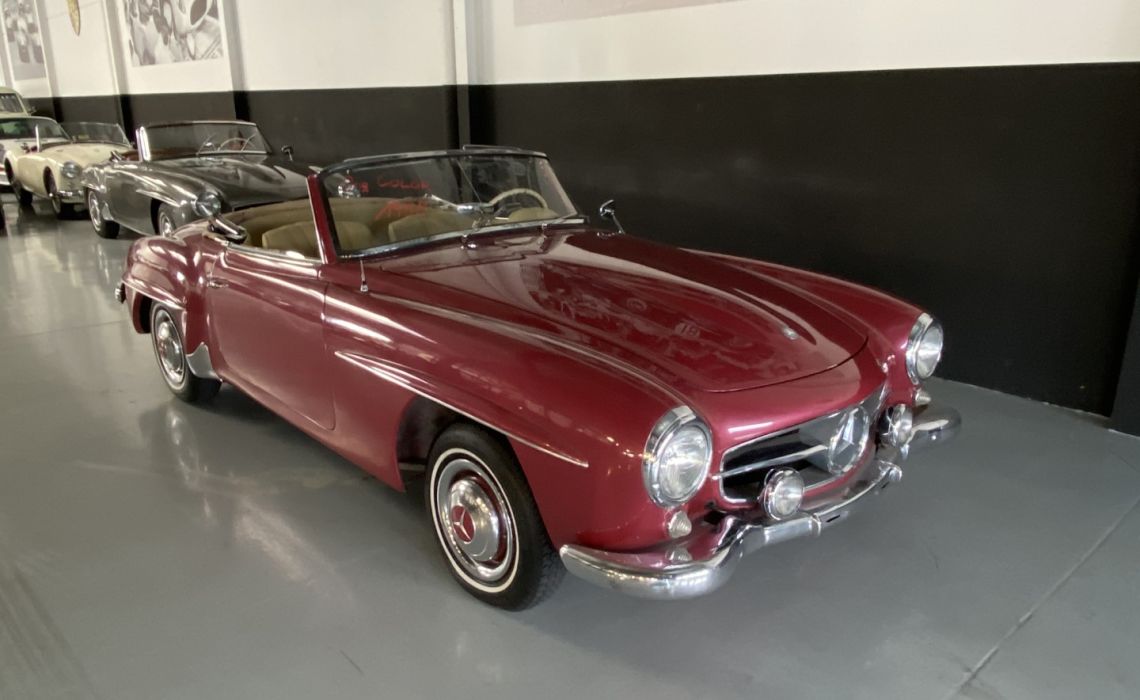 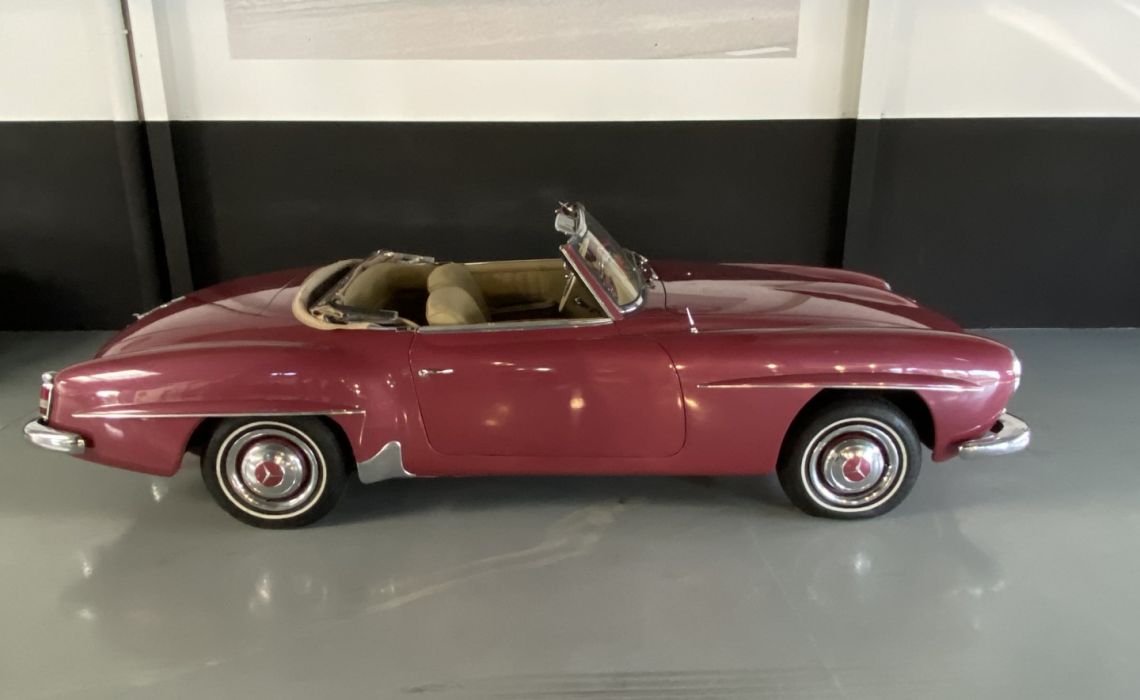 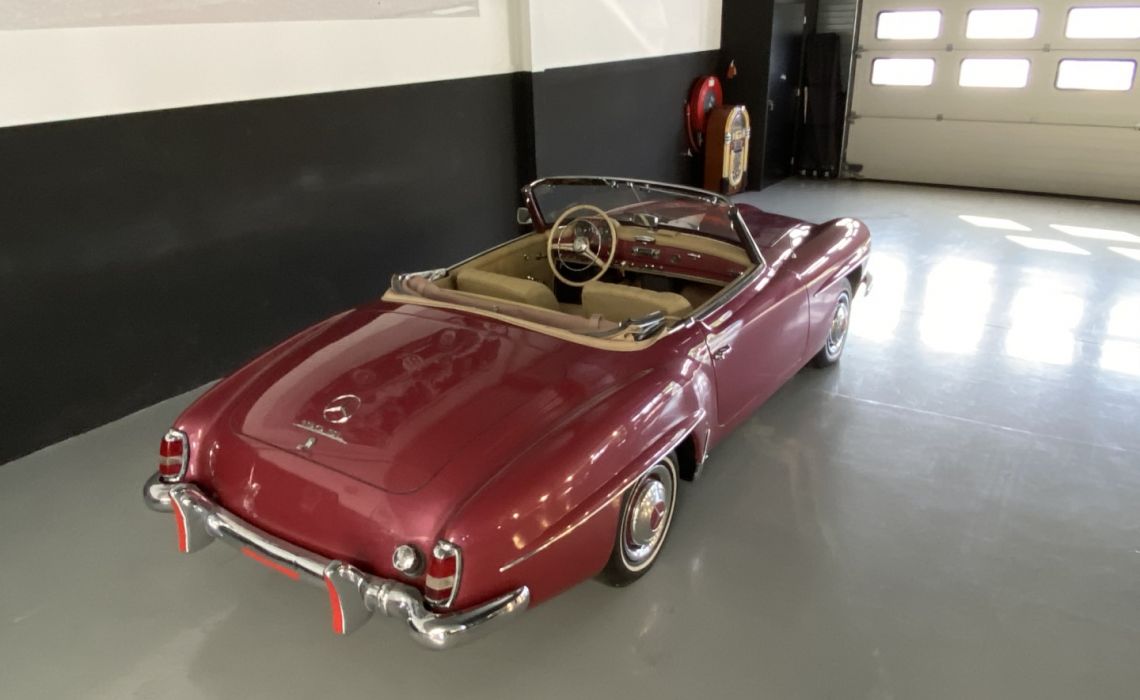 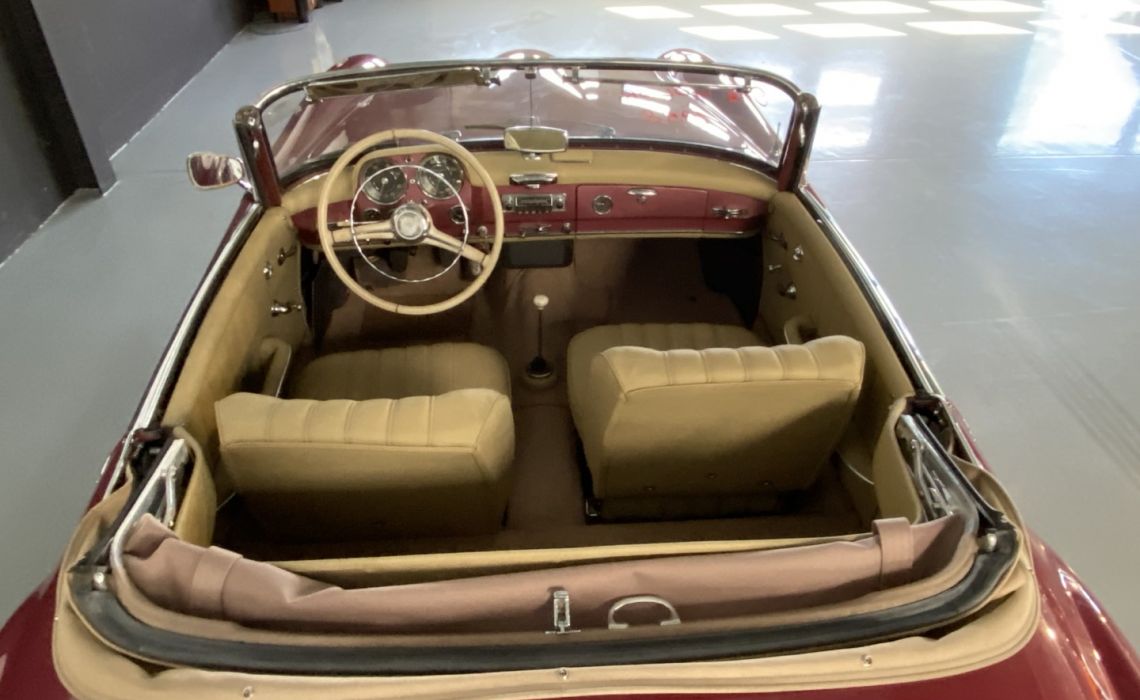 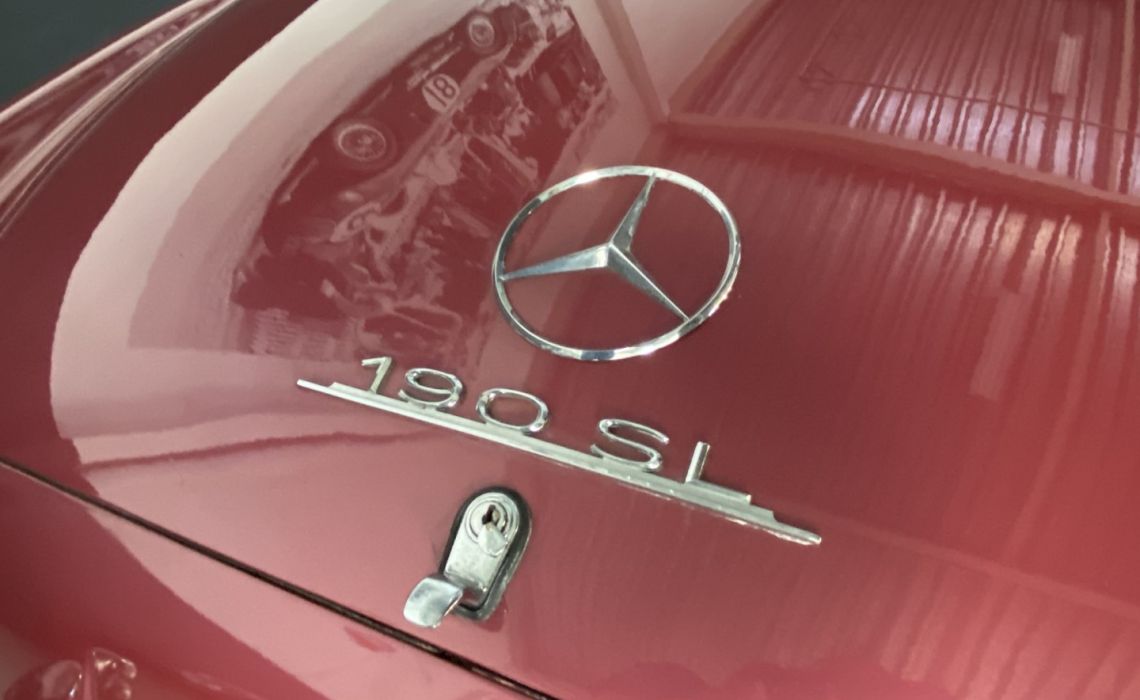 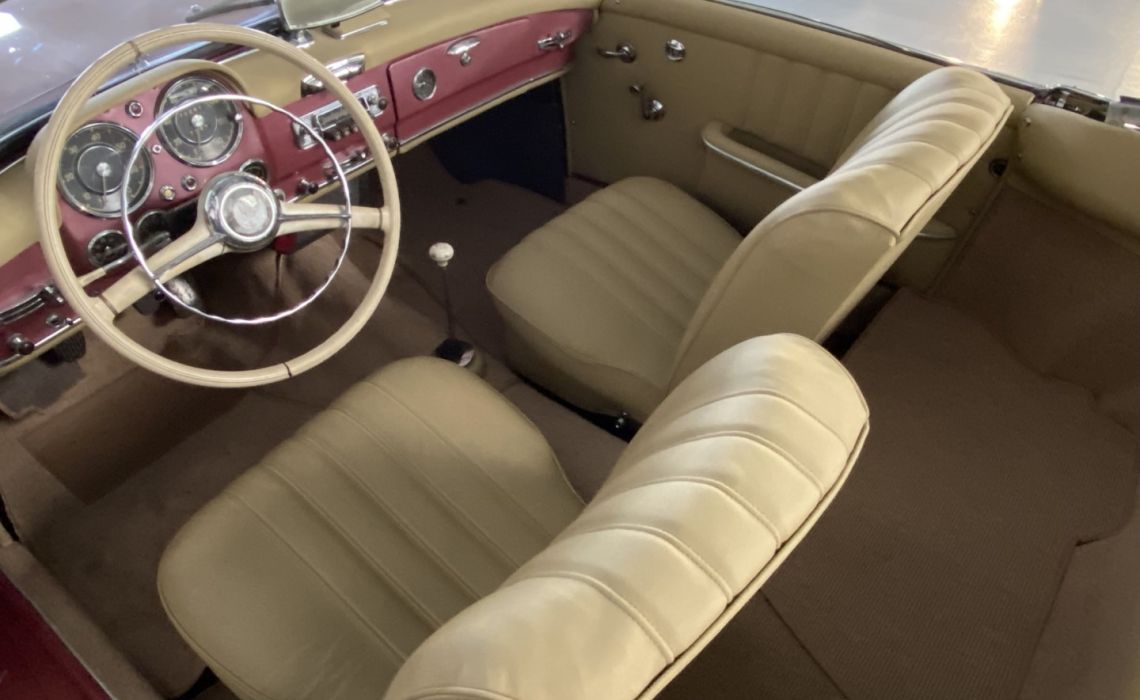 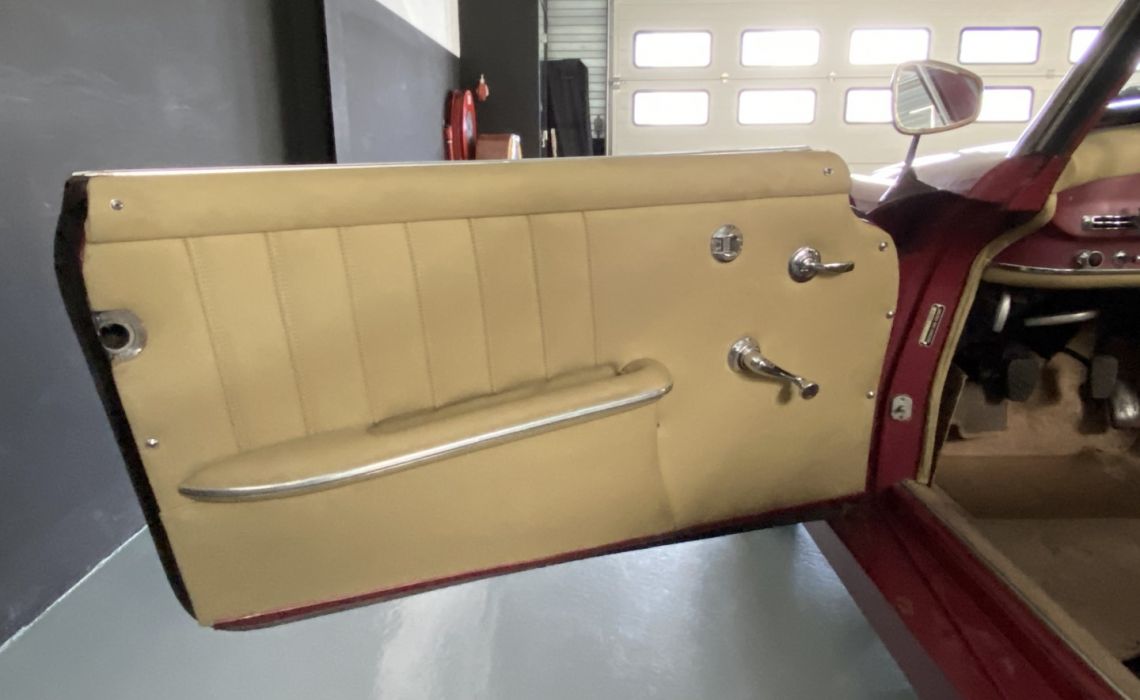 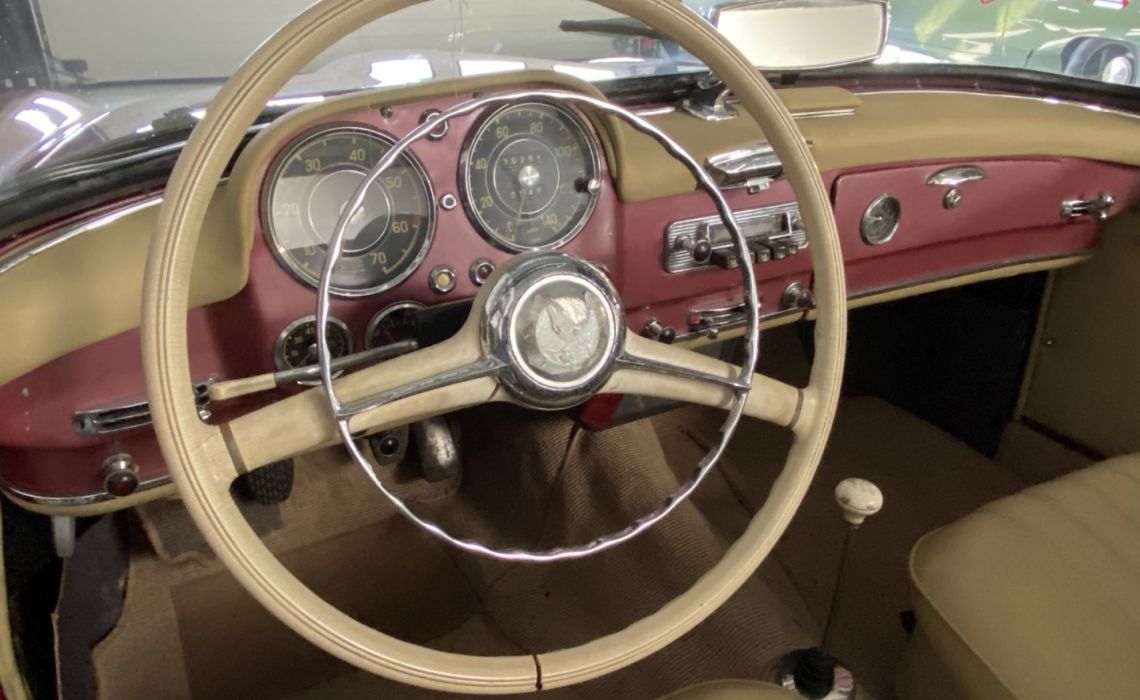 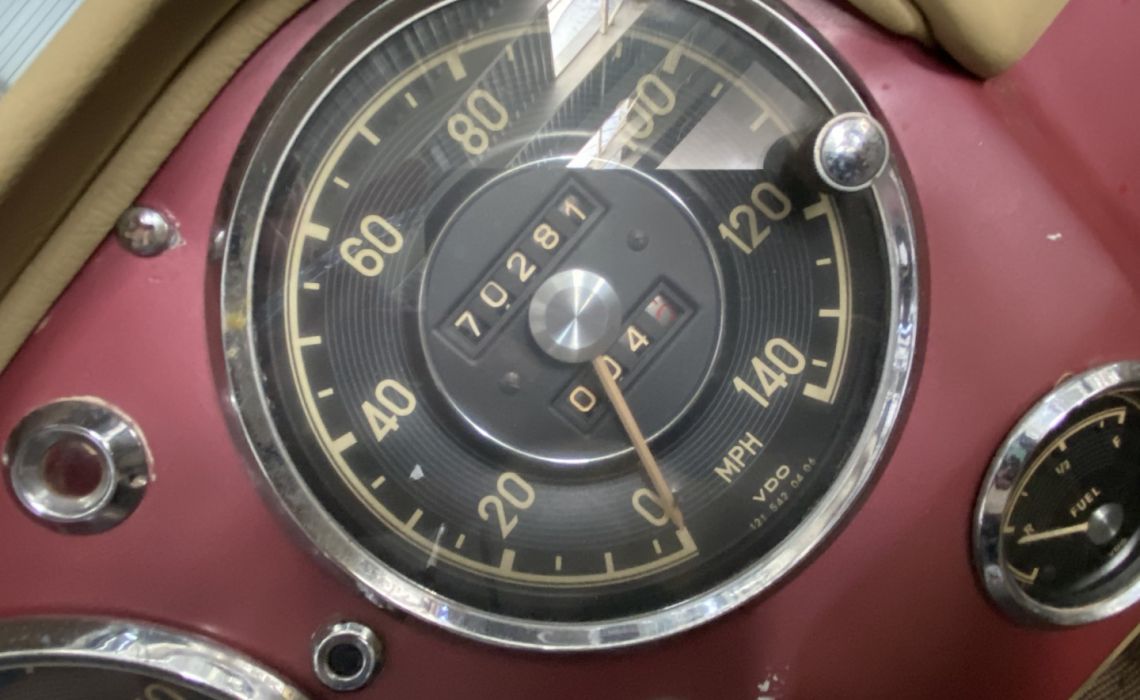 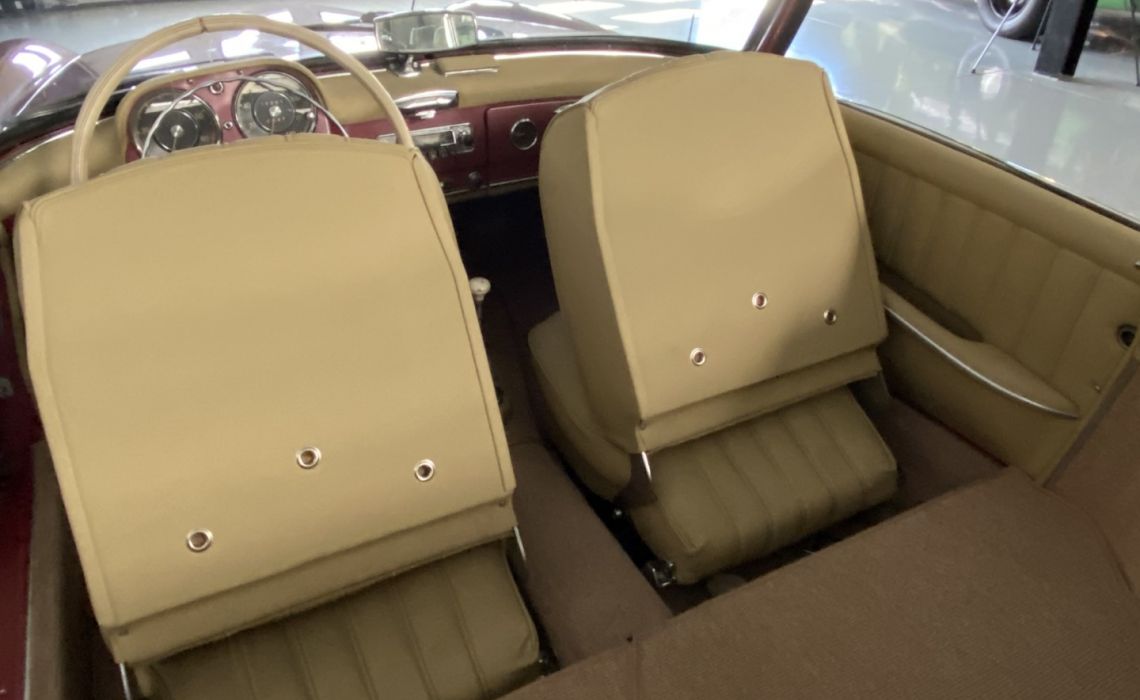 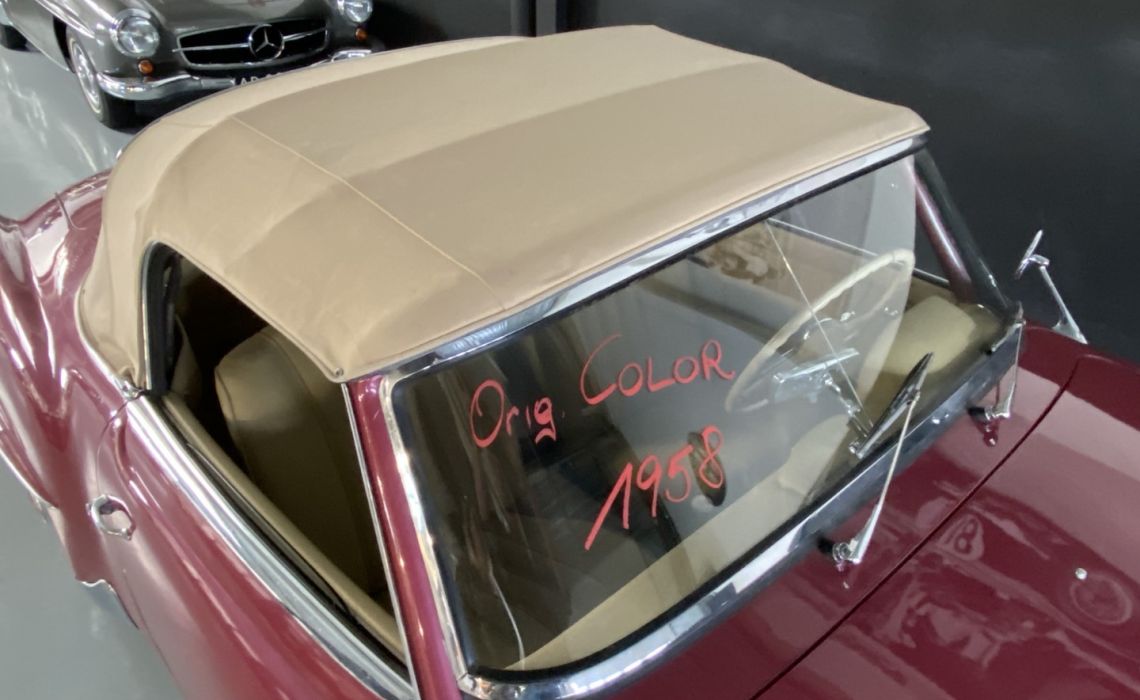 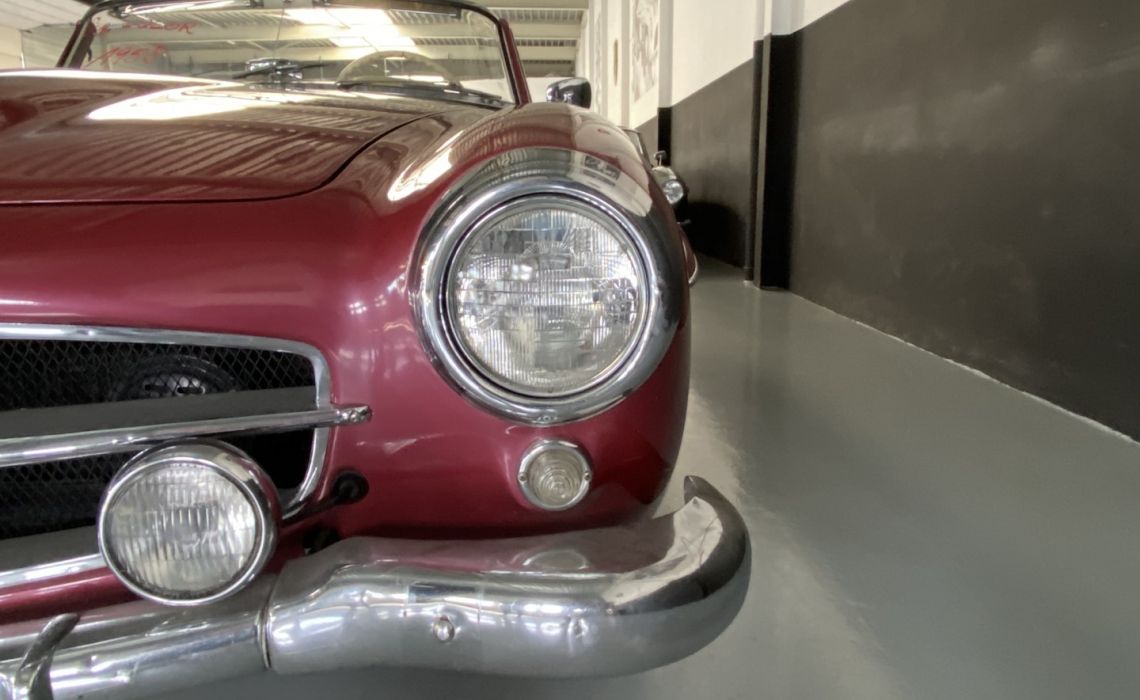 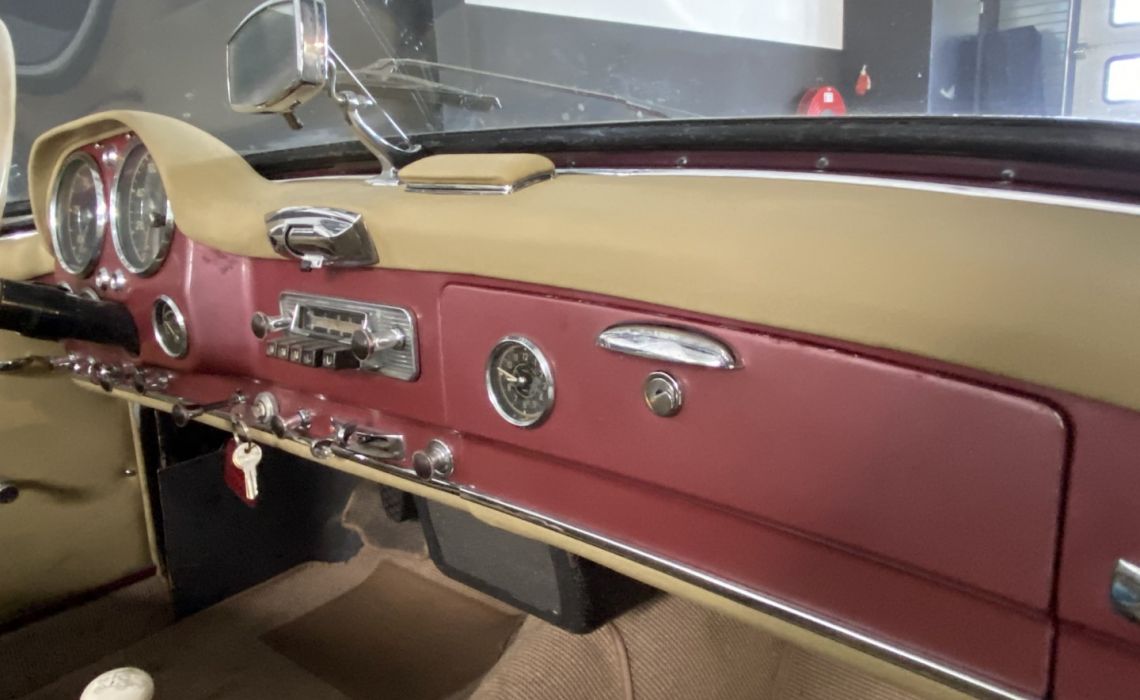 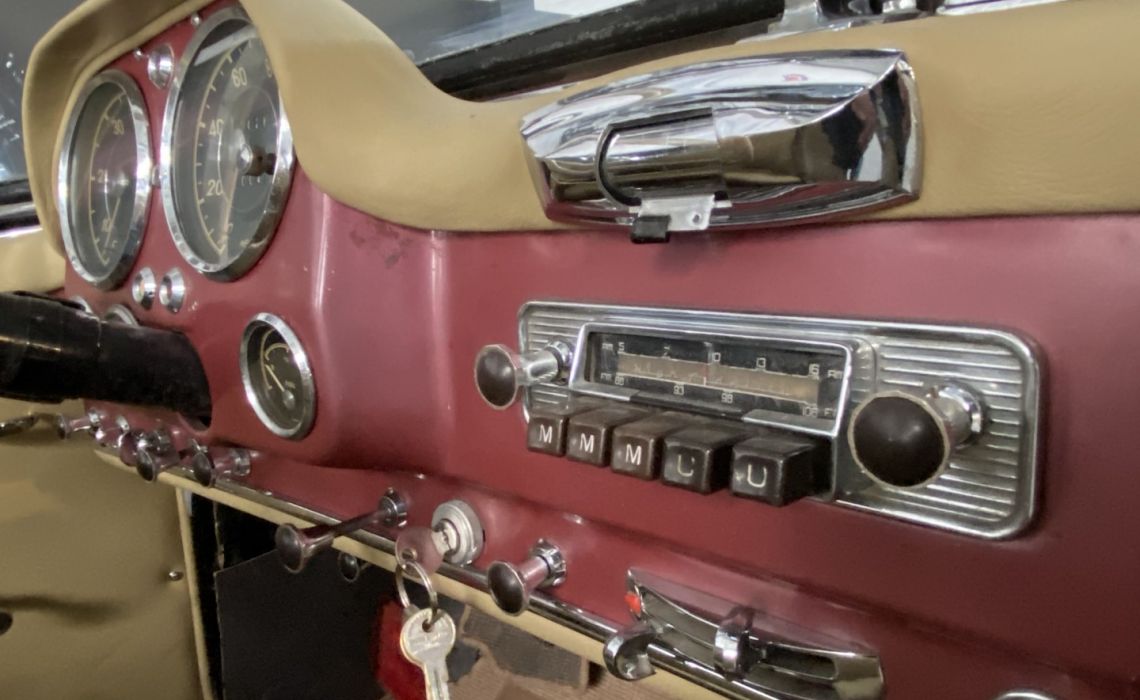 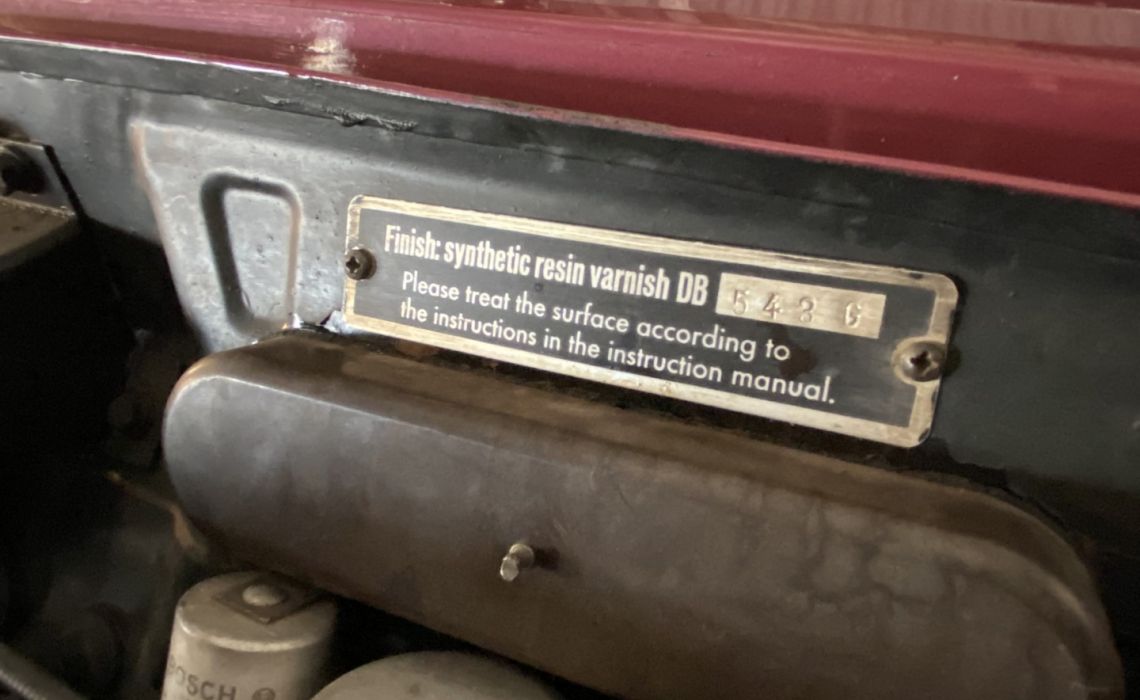 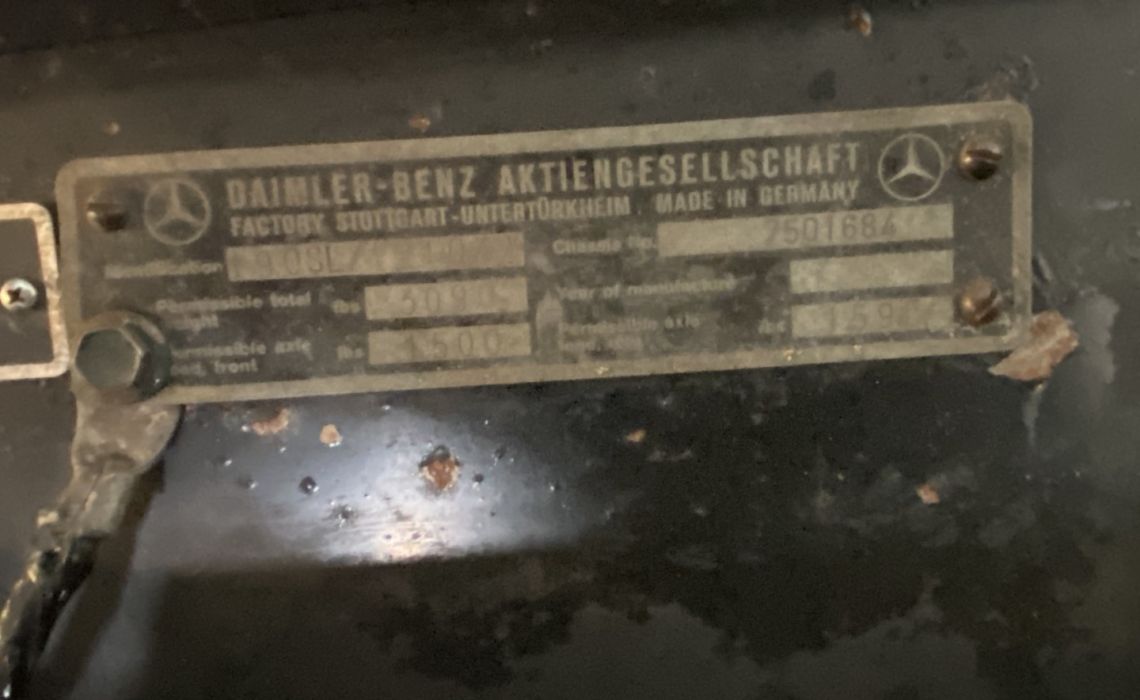 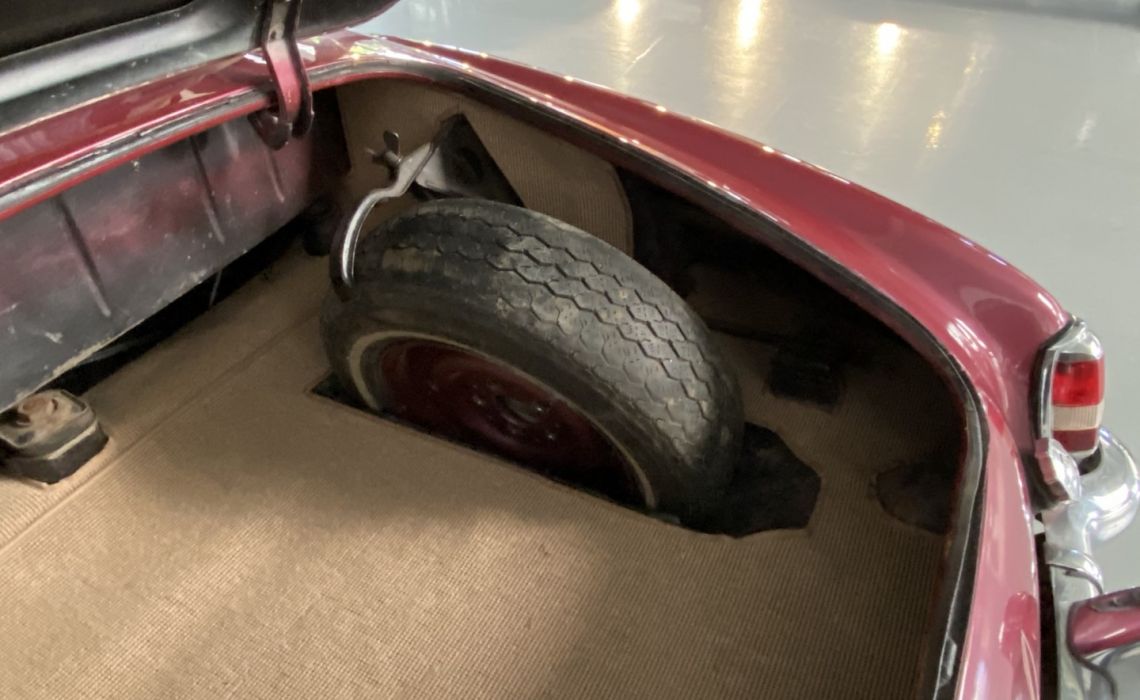 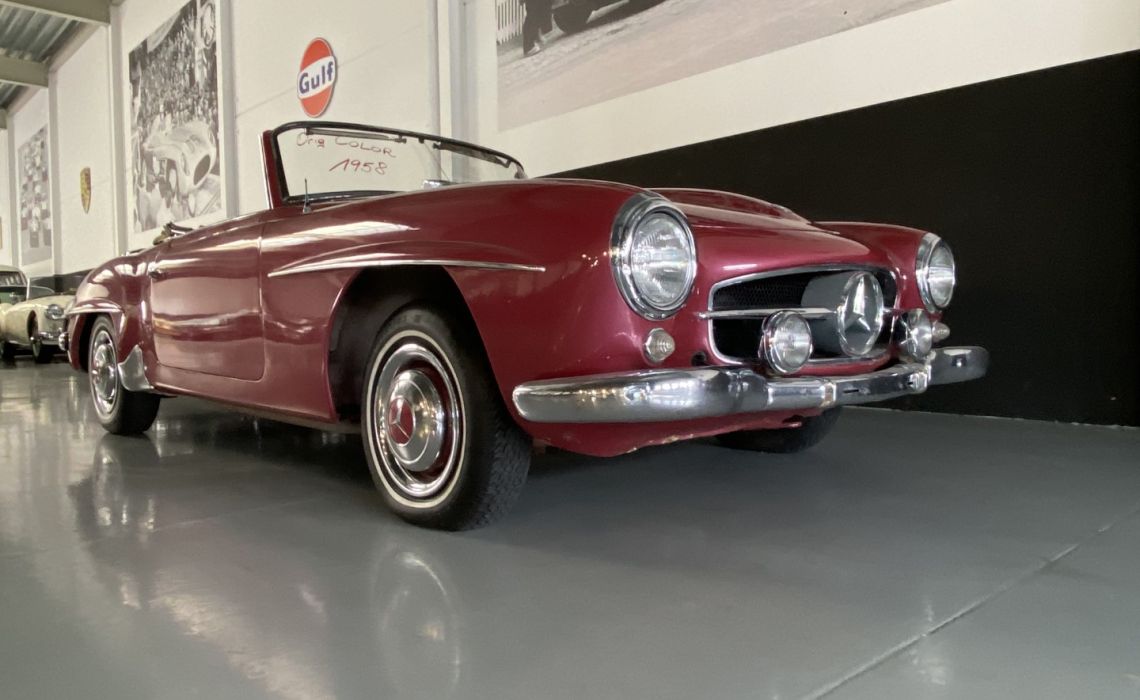 Legendary Classics has just received this extremely rare Strawberry Red 1958 Mercedes 190SL roadster. The car is an absolute rarity with its strawberry red in combination with a crème interior and crème soft top. This is exactly like it was delivered when it left the factory.

This Mercedes 190SL Convertible is matching numbers and is still fitted with its original Solex carburettors. The car is in running and driving condition. The paint is showing its age and the car would greatly benefit from a respray. The engine is running very smoothly and the Solex carburettors are well dialled in. The engine does have fluid losses and does need some attention.

The car is sold as a restoration project even though it is in running condition and has a Belgian historical registration. The car comes with its original hard top.

The Mercedes-Benz 190 SL (W121) is a two-door luxury roadster produced by Mercedes-Benz between May 1955 and February 1963. Internally referred to as W121, it was first shown in prototype at the 1954 New York Auto Show and was available with an optional removable hardtop.
The 190 SL presented an attractive, more affordable alternative to the exclusive Mercedes-Benz 300 SL, sharing its basic styling, engineering, detailing, and fully independent suspension. Both cars had double wishbones in front and swing axles at the rear. Instead of the 300 SL's expensive purpose-built tubular spaceframe, the 190 SL's structure used a shortened unitary floor pan modified from the base saloon.
The 190 SL was powered by a new, slightly over square 105 PS (77 kW) Type M121 BII 1.9 L straight-four SOHC engine. Based on the 300 SL's straight six, it had an unchanged 85 mm bore and 4.3 mm reduced 83.6 mm stroke, was fitted with twin-choke dual Solex carburetors, and produced gross 120 hp (89 kW; 122 PS).
The car was available either as a soft-top convertible (initially priced at DM 16,500/US$ 3,998) or with removable hardtop (DM 17,650/$ 4,295). A small third-passenger transverse seat was optional. During its first years the 190 SL was available as a sports-racing model with small perspex windscreen and spartan one-piece leather covered bucket seats and aluminum doors. In 1959, the hardtop's rear window was enlarged.

The famous list of surcharges already existed back then, it was no problem to spend one or two thousand more in addition to the basic price. Even back then, people preferred to invest in a Mercedes-Benz rather than any other car. High resale value and low depreciation were already built into every Mercedes-Benz in the past.
Of course, this was most likely to be recognized by the people who had already achieved something in the still young Federal Republic, e.g. Henri Nannen, editor of Stern magazine, who drove through the Soviet Union in a 190 SL and also contributed to the car's popularity. But what advertising could be better for such a car than television, which was already popular at the time? The 190 SL was seen as a popular prop in many homeland and Hollywood films: at that time, the car wasn't just seen on the screen for a fleeting second.
The greats of the society at that time, such as Rudolf Prack, Gunther Phillip, Freddy Quinn, Toni Sailer, Gina Lollobrigida, and Prince Rainier of Monaco had such a Mercedes 190 SL in their private possession. 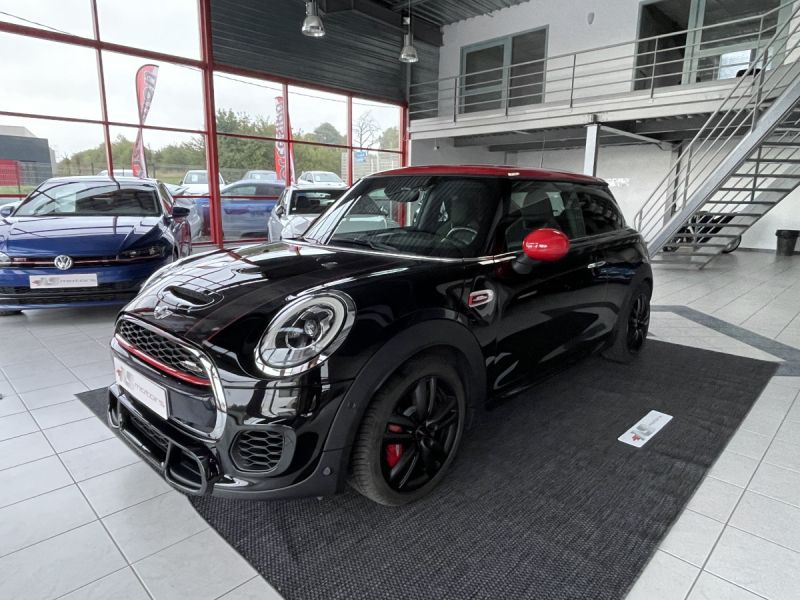 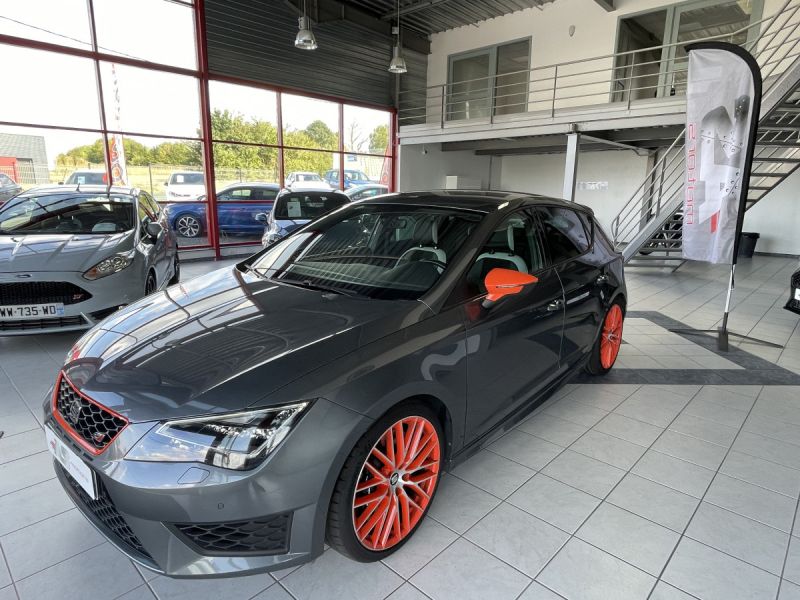